Mazda Miata: present and past 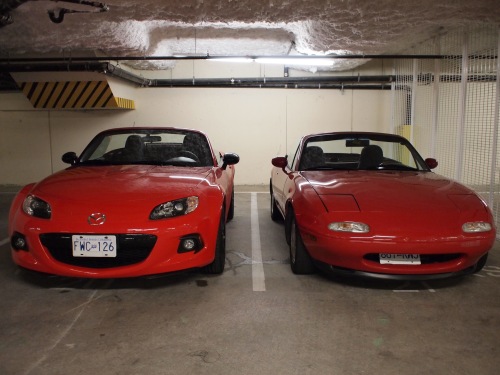 We don’t need to wait for the Borg from Star Trek to take over the human race before human and machine become one. That can happen simply from sitting inside what is arguably the best open-air sports car made in the last two and a half decades: the Mazda MX-5 Miata.

I recently tested the 2013 MX-5 GS — with a six-speed manual transmission in red, of course — and did a little new versus old comparison with my own 1990 Classic Red Miata.

Lowering yourself into the cockpit of the latest model you realize how much has stayed the same in the last 24 years. Besides having LED-equipped needles, the instrument cluster layout is identical down to the oil pressure gauge residing front and centre. There is no extraneous gadgetry in the cabin to detract from the pure driving experience. The bucket seats hold you in snugly and the steering wheel, pedals and shifter are all placed perfectly within reach. The GS features the power retractable hard top that is a joy to watch unfold in seconds, although when up it creates a sizable blind spot on the driver’s side corner that can make it tricky to shoulder check. The removable hard top on my 1990 affords a much wider view thanks to its massive rear window, but something I would gladly trade for the convenience of not having to enlist the help of a friend to take it off.

The exterior of the new Miata is easy on the eyes. Several admirers likened the front of the car to the late Honda S2000, which is hardly a negative observation — and the bumper still features the trademark smiley-faced air dam looking as happy as ever. The GS has a contrasting colour theme running throughout that includes black accents on the side mirrors and top. It’s finished off with 17-inch dark gun metallic wheels that dwarf the 14-inch “daisies” found on the original. The front turn signals are uniquely embedded in a bezel surrounding the fog lamps, and there is a subtle splitter that rests below the bumper for increased aerodynamics.

As always, this is where the MX-5 shines. The newer 167-horsepower 2.0 L engine is only a modest increase over the 116 ponies coughed up by the tiny 1.6 L in the Miatas made between 1990 and 1993, but boy does it feel different. With lightning-quick throttle response and short gear ratios, the car jumps off the line and gobbles up any twisty bit of road you throw at it. I felt like Michael Schumacher attacking the windy Sea to Sky Highway on the way to Whistler, without the F1 fuel costs. Natural Resources Canada rates fuel consumption of the 2013 MX-5 at a reasonable 9.7L/100 km city, 7.1 highway. The suspension is taut but not bone-jarring, and does well at soaking up irregularities in the road as well as the sports car’s worst enemy, the speed bump. Being a small and light rear wheel drive car, I confidently entered corners without the car becoming too tail-happy. Even in wet weather the car rotated neutrally, unlike my ’90 that has given me a scare on more than one occasion when taking a turn too quickly. 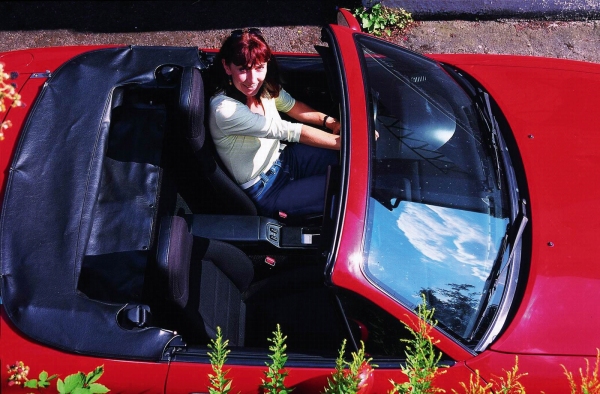 Driving the Miata isn’t about looking cool or going fast. It’s about the emotional response it elicits when you get behind the wheel on a sunny day with the wind in your hair and a mountain switchback on the horizon — something that hasn’t changed from the initial year the vehicle was offered until now. That’s not to say the car doesn’t have any faults: The sound system is tinny and struggles to be heard over everything else when the top is down (but even that is not necessarily a bad thing since my favorite thing about the new Miata is actually the pitch-perfect exhaust note); the trunk won’t hold much more than a briefcase and a few bags of groceries; and one doesn’t really step out of the vehicle as much as roll out due to the low ride height. Hopefully you also have another larger car to do all the practical stuff, or have only one friend.

Small prices to pay to be a Miata owner.

One thought on “Mazda Miata: present and past”