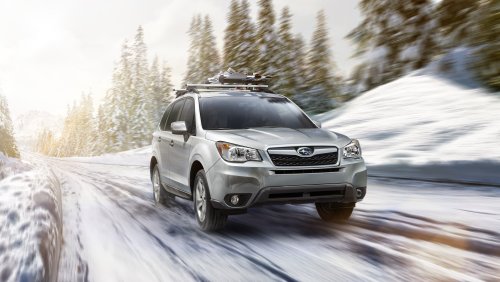 My mother is a 10-year veteran Subaru Forester driver. She has owned two different models — both green — and both highly domesticated, relegated to tasks such as driving to the grocery store or grandma’s house. This all but eliminated any serious look at the compact SUV as a vehicle I’d ever consider owning. But the 2014 Forester is not that vehicle, capable of more than just utilitarian duties.

The new iteration has been changed inside and out. When I first picked up the 2.5i version with the limited package I was to drive for a week, I felt the vehicle was visually much bigger than the outgoing model, even though in reality it has only grown by 35 millimetres in length and 15 mm width. The Venetian Red Pearl is a striking colour, nicely contrasted with the factory-tinted rear windows and other black and silver accents on the exterior. Body lines are more fluid and less angular than before, but the overall character and feel of the Forester remains — unlike some of the other cars in the family, like the WRX and STI, that have a penchant to look like a red-haired stepchild with every subsequent generation. 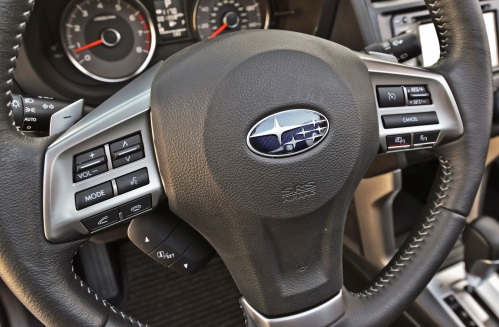 Inside, the Forester still benefits from a huge moonroof that makes most others feel severely inadequate. The cabin is very spacious, and the black leather-covered seats are plush and of a much higher quality than the beige pleather found in my mother’s third gen. The Harman Kardon eight-speaker sound system was a nice touch (although I found the XM satellite radio output volume much lower than regular AM/FM, gave me a scare when switching over). Plenty of soft-touch plastics give the interior a more upscale feel, as does the brushed aluminum-looking bits. When you unlock the vehicle, a bright LED courtesy light emanates from the small Subaru Pleiades (star cluster) logos found in the top corner of the side mirrors. Brilliant! There is also switch on the dash that when activated allows the tailgate to stay open at a 3/4 position, presumably for when one needs to haul something that won’t quite fully fit inside the vehicle. Under normal operation, the power tailgate fully opens and closes with the touch of button either in the vehicle or on your key fob, albeit very slowly.

The 2.5 litre 170 horsepower is capable of taking you from putting around town to the highway and then to the backroads, where you might even be able to take advantage of X-Mode. Just above the gear select lever is this mysterious X-Mode button that Subaru says can add confidence to the greenest driver. The feature alters the behaviour of the engine, transmission, all-wheel drive, brakes and other components to help you navigate through rough terrain and slippery surfaces safely. If you encounter a steep decline, Hill Descent Control kicks in doing the braking for you so a steady speed is maintained as you travel downwards. While I suspect many Forester owners may never use this feature living in blissful ignorance, it’s nice to know that it’s there. Other observations include the car displaying a slight hesitation when switching back and forth between park, drive and reverse, and be wary of the tendency for the throttle to be jumpy when you initially tap the gas pedal from a standstill. Finally, expect a smooth driving experience that keeps you very insulated from road noise.

The limited package is priced right between the entry-level 2.5i and the top of the line 2.0XT turbo, and with seven different trim levels of the Forester to choose from it’s worth doing the research to make sure you’re picking the right one that suits your needs. I found our tester to be a good compromise between practical and fun, although mom would probably perfectly fine with the $25,995 base model.