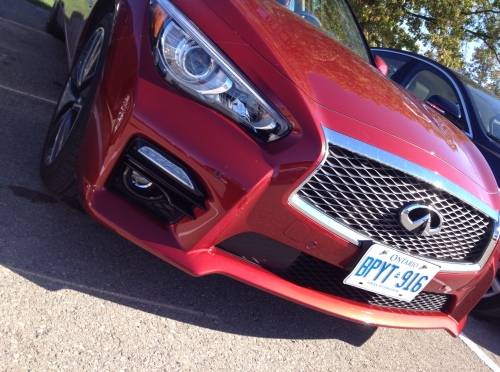 The all-new 2014 Infiniti Q50 is quite a departure from the G37 sedan we’ve come to know, and that will eventually be replaced. This is not only from a looks standpoint, where the Q50 is much angrier looking than its soft and curvy predecessor, but also in the technology department where the luxury division of Nissan has introduced a first in the automotive world.

Available on certain models is the debut of Infiniti’s Direct Adaptive Steering. Forgoing traditional mechanical steering (there is a mechanical link failsafe should something go wrong), the Q50’s utilizes electric sensors and motors that supposedly deliver a faster and more precise response. During our test with the hybrid model, the steering did feel fast and tight, though I was more fascinated with the ability to select between different modes such as sport, standard and even a personal mode where you can tailor the input feel to your own tastes. I would have liked more time to examine the custom setting more closely, but I was busy admiring the other interior details.

Sitting in the vehicle is a pleasant experience – Infiniti says the wood and aluminum design was inspired by traditional Samurai armaments. I was puzzled by an odd sensation when I initially lowered myself into the gorgeous driver’s seat, and discovered there is an adjustable “flap,” for lack of a better word, that can be extended under your thigh to accommodate various frames and ergonomic preferences. The door panels are covered in a nice quilted material and the leather steering wheel feels just right to the touch, although there are two excessively-sized paddle shifters in behind that are a bit of an eyesore. I found the sunroof, which does not extend into the very roomy back seat area, small for its class.

Being a hybrid, I didn’t expect too much in the way of performance, but the Q50 packs a punch. The oomph is provided by a 3.5-litre 24-valve V6 engine, rated at 302 horsepower and 258 pound-feet of torque, combined with a 50-kilowatt electric motor that makes 67 hp and 214 lb-ft. The result is an immediate and very torquey response whenever you depress the gas pedal. Our car was equipped with all-wheel drive and the seven-speed automatic transmission that performed admirably through a small parking lot slalom course for a big car, although it actually weighs a little less than the G37 despite being a tad longer in length. Cheaper, too – it starts at $37,500. Rear-wheel drive purists can get a version that has just that, and there is also a 3.7-litre V6 gas-only engine (328 hp/269 lb-ft).

I really enjoyed the Q50 Hybrid in the Premium AWD trim level, and even at $49,500 it still seems like a good deal when you consider how much some of the competitors like the Hyundai Equus and Acura RLX cost. And with fuel economy numbers of 7.5 L/100 km in the city and 6.3 on the highway, the only question I have is where do I sign up?

[First published in the Nov./Dec. issue of Darpan Magazine.]