Even though Mitsubishi has been in Canada for 10 years now, it is still very much the new kid on the block as the newest and youngest car company in the country. The 2014 model of their third best-seller behind the Mirage and RVR, the Mitsubishi Outlander recently hit dealerships — and the niche manufacturer held a media event in Squamish to show off the newest safety gadgetry and off road capability of this crossover utility vehicle (CUV).

John Arnone, public relations manager for Mitsubishi Canada, said that as a smaller company, Mitsubishi focuses on sustainable segments like the compact car and crossover market.

“We have no luxury division, no pickups, no minivans,” said Arnone, adding the Outlander has sold 52,000 units in Canada since its launch in 2003. 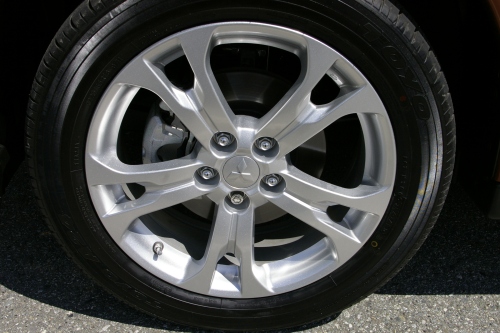 The 2014 is a complete redesign that has the Outlander resembling a more traditional CUV look. The 2010 featured the polarizing “shark nose” front end shared with the Lancer turning it into one of those love-it-or-hate-it affairs.

“The 3.0 L V6 carries over small changes. There is an improved exhaust system that helps fuel economy,” said Ulmer. “ECO Drive is standard on all models, when activated it’s not going to allow the driver to give aggressive throttle input. In an emergency, wide open throttle will still work.”

Improved aerodynamics and weight reduction (shaving off 100 kilograms from the previous model) round out the other fuel-saving measures. In the advanced safety category, Mitsubishi has added adapter cruise control that keeps a pre-set distance from the car in front and behind the vehicle using a radar system. The same system is utilized in the forward collision mitigation that warns the driver of a possible collision with an object in front, and will automatically apply the brakes. Using a windshield-mounted camera, lane departure warning notifies the driver with audio and visual notifications if the car begins to drift out of the lane. These options can be switched on or off.

Just because Mitsubishi isn’t in the luxury vehicle game, Ulman said, that doesn’t mean the company can’t apply upscale features to the Outlander. This applies mainly to the interior — he said drivers can expect a quiet ride from increased sound-deadening to isolate noise from the drivetrain. That should make the Rockford Fosgate premium audio system sound even better. A power tailgate has been added, as well as a new optional navigation system that runs off of an SD card. An extra SD card slot is provided for playing music.

Interior of the 2014 Mitsubishi Outlander. Photo by Benjamin Yong

To demonstrate all of this, journalists were invited to drive the new Outlanders — available in either a 2.4-litre 166-horsepower four-cylinder or 3.0 L 227 hp V6 — from the smooth roads of downtown Vancouver to pothole-ridden logging trails in Squamish on a rainy Wednesday afternoon. Arnone said that about 70% of Outlanders sold in Canada are the V6 model and, curiously, the opposite holds true for our neighbours down south, where the four-banger is preferred.

For most drivers, four cylinders would suffice for around-town driving, and this configuration is the most economical. If you find yourself needing to tow boats, trailers or RVs, you’ll want the extra power and smoothness of the V6. Both versions handled the mostly-mild cruise in good spirits. Once we arrived in Squamish, it was time to examine the different drivetrain offerings.

The entry-level ES 2WD is front-wheel drive, and, much like its base engine, is fine for regular duty. Step up to the ES AWC and you get all-wheel control selectable in either an automatic mode that activates only when the system detects slippage, or a locked setting that keeps all four wheels engaged at all times. This kept any slippage to a minimum on the wet, gravely road that led us up and back down a mountain on the test route. There is even a top-of-the-line GT S-AWC trim that adds a setting for snowy conditions, although luckily there was none of the white stuff falling in June. 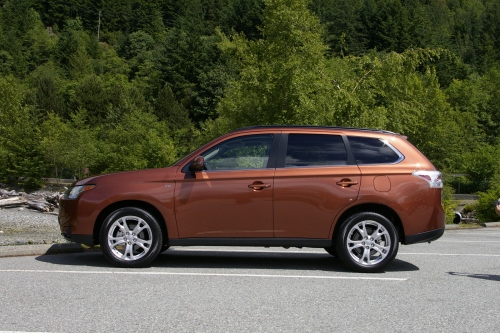 The Outlander in Copper Metallic. Photo by Benjamin Yong

The 2014 models should now be available at a dealer near you, starting at $25,998 for the ES and going up to $38,728 for the GT S-AWC. One of the advantages of being a niche automaker is that a lot more attention can be turned towards the few vehicles that they produce, and this feels like the case with the Outlander. My only question is how necessary all the electronic advanced safety features are, and whether this creates an increased reliance on them from the modern-day driver. But it was pointed out that it is precisely modern-day realities and distractions, like text messaging while driving, that necessitate these additions.