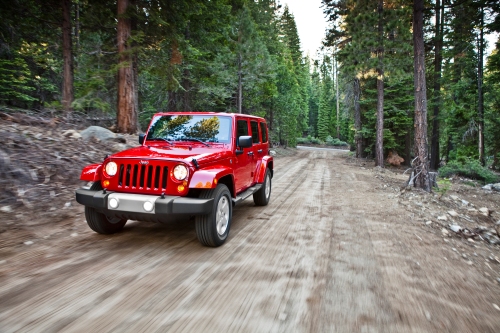 Photo courtesy of the Chrysler Group

Being the original brand that has influenced all other off-roaders and SUVs coming after it, Jeep has quite the reputation to maintain. Fortunately, they have had nearly 70 years to perfect the vehicles with the iconic round headlights and vertical-slat grill commonly seen on army bases and city streets around the world. One of their latest models, the 2013 Wrangler Unlimited Sahara Edition 4X4, lives up to its name.

Particularly in Commando green, as our tester was, the Wrangler has an intimidating presence. At 4,684-millimetres in length and 1,798 mm height, the  Jeep is more at home in the wild backroads of the Interior than the cramped parkades of urban dwellings. Having said that, the Wrangler still behaves very car-like and manages to squeeze into spaces that would prove laughable in something like a Hummer. The great thing about the Unlimited, as opposed to some other SUVs, is the toyish nature of the vehicle. By that, I mean virtually the entire roof is removable. For a short drive down to the beach, you can pop off the two roof panels right above the front cabin. Fancy more sun on an extended road trip? The rear optional body-coloured “Freedom Top” hard top can also be removed revealing a soft top underneath. I shouldn’t make the process sound like an overly easy one, because it isn’t — various levers have to be pulled and knobs removed before anything can be taken off. There also isn’t anywhere to store the panels inside, so hopefully you have a garage or a friend’s living room where you can stash them.

Photo courtesy of the Chrysler Group

Driving the Jeep is a comfortable experience. The Sahara model features leather seating, plenty of upscale-looking materials on the interior surfaces and a wonderful Alpine sound system that delivers even while open air driving.If you’re used to piloting Asian cars, as I am, the different placement of some of the controls such as for audio (hidden trigger buttons behind the steering wheel) and the windows (dash-mounted switches) takes some getting used to. A pet peeve of mine is lack of storage space in vehicles, so you can imagine my excitement upon seeing various pockets and compartments scattered everywhere.

Wranglers are built just as much for driving over rocks and sand dunes as they are for making the commute to ad from the corporate grind. Nothing else besides its smooth 3.5-litre V6 engine would really fit here, with 285-horsepower on tap should you need it. I didn’t get a chance to drive up (or down) the side of a mountain during my week with the vehicle, but it handled around town duties like a champ. It’s reassuring to know if I did feel the need to scale the sheer face of the Chief, there is the on-the-fly four-wheel drive system, underbody skid plating, beefy tires mounted on 18-inch wheels and heavy duty suspension with gas shocks. The bad news? Transport Canada fuel consumption figures for the Sahara Unlimited are 13.2 L/100 km in the city and 10.0 highway for the five-speed automatic transmission — which isn’t horrible — but there’s a reason you don’t see Smart cars and Honda Insights on logging roads.