As Marvel Comics famed superhero team the X-Men have taught us, every once in awhile evolution skips a few steps. This certainly feels the case with the 2013 Nissan Juke NISMO — that’s short for Nissan Motorsports — a small hatch that packs a powerful punch and has the face of a cartoonish beast.

Actually, it looks a praying mantis or some other kind of predatory insect more than anything else. The headlights are one of the few things on the vehicle that have a smooth flowing shape to them. They sit between small slits above that house the turn signals, and below there are some subtle LED daytime running lights tucked into the front cooling ducts. Red accents abound on the outside and the inside, such as the red-painted side mirror caps and trim running along the bottom of the ground effects. And what sport-edition of the regular Juke would this be if it didn’t sit atop some 18” twin-spoke wheels encased in Continental summer tires? 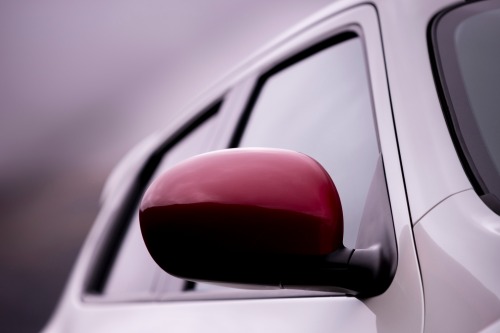 Venture inward and you’ll find a nod to motorsport heritage, such as the suede-finished door panel inserts and steering wheel (I’d hate to see what the wheel will look like after a few hot and sweaty summers, although wearing racing gloves is always and option). The dash buttons featured something I hadn’t seen before, and took me a good couple of days to fully grasp their function. They are actually clear when the car is turned off, and when on, they do different things depending on the setting activated. Let me explain: there are two main switches for climate control or drive functions. Press climate, and the usual fan and air conditioning options appear underneath the buttons. Press D-Mode, and the buttons morph to allow you to choose things like normal, eco and sport modes depending on whether you feel like saving fuel or increasing sharper throttle response. Very mutant-like.

If you turn on sport mode, all 197 turbocharged horses and 184 lb-ft of torque come alive when you jab the gas pedal and the all-wheel drive system with 50/50 distribution helps to put the power to the ground. Sadly, the NISMO AWD is only offered with Nissan’s Xtronic continuously variable transmission, fancy for automatic, but it doesn’t detract too much from the fun. The fairly wide track and big wheels certainly helps handling and the car never feels squirrely or like it wants to understeer into a ditch at higher speeds. The great thing about being a smallish car with a small 1.6-litre engine is that it is easier on the wallet that other similar enthusiast-oriented cars. Fuel economy is rated at 8.0 L/100 km in the city and 6.6 on the highway.

Sometimes when you buy a performance-tuned car, it means you have to make some compromises like giving up cargo space or only being able to drive at the track. With ample seating for five and an efficient engine, the Juke NISMO proves sometimes you can have your cake and eat it too — even if it means driving around in a real-life cartoon.