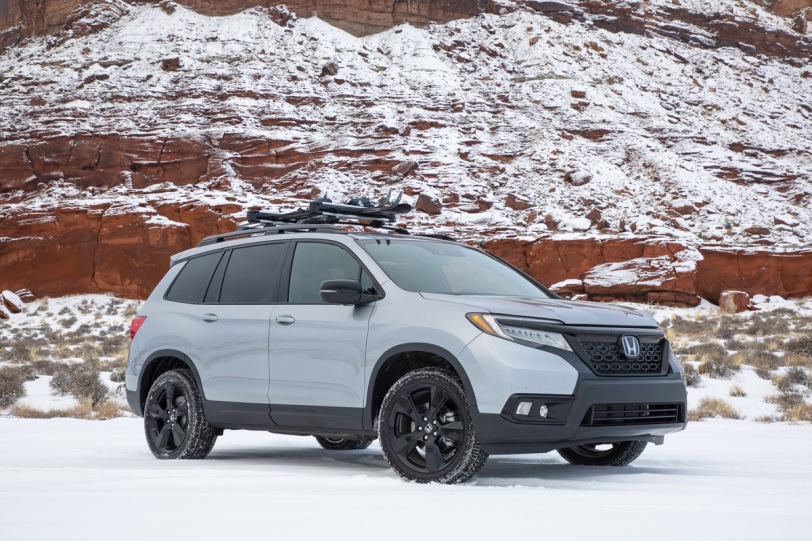 Seeking a vehicle that combines the agility of a CR-V and the utility of a Pilot? Then the first-ever Honda Passport may be the answer. Officially launched just last year, the five-passenger model offers a sporty look and ride as well as a load of interior room.

Honda calls its latest product the “most rugged light truck yet,” built on the brand’s unibody Global Light Truck Platform shared with the Pilot mentioned above and the Ridgeline pickup. Riding on a fully independent suspension and driven by all four wheels via available i-VTM4 torque-vectoring all-wheel drive, handling is tight and more car than SUV-like.

An impressive feat considering the mid-size crossover’s sizable footprint, measuring 4,839 millimetres long, 2,116 millimetres wide and 1,835 high. Ingress and egress might potentially be challenging for some folks depending on how tall they are. My tester had OEM running boards added, however the height they were placed made them awkward to step on getting in and out.

Conditions such as rainy roads to muddy trails are no problem as the AWD system is able to send up to 70 per cent of torque to the rear axle, splitting between the left and right wheel as needed. In addition, AWD trims have 213 millimetres of ground clearance — 27 more than Pilot — to clear any pesky obstacles when encountering rough terrain.

A 3.5-litre V6 engine is standard equipment, pumping out a healthy 280 horsepower and 262 lb-ft of torque, mated to a nine-speed automatic transmission operated by buttons — which feels clumsy to use — rather than a traditional lever. Power delivery and shifting is smooth, if a little noisy under heavy acceleration.

Following a week of driving mostly in the city with a little bit of time spent on the highway, my fuel consumption average was 14.6 L/100 km.

Providing a tow capacity of 3,500 pounds hauling recreational toys along is a cinch, especially since the cabin display can show a birds-eye view while backing up to aid in connecting up a trailer. For more serious loads, customers should choose the towing package bumping up the rating to 5,000 pounds.

Open up the tailgate — powered on higher trims but noticeably missing a feature that shuts and automatically locks the doors — and 1,166 litres of space is revealed, or 2,205 after the one-touch folding rear seats are stowed.

Why designers decided not to fit an optional third row of seating is puzzling. Lift up the cargo floor and there’s another 70 litres, perfect to stash valuables out of sight. A large centre console cubby affords additional covered storage.The rest of the interior is functional, although the sunroof is on the small side and the infotaiment system would benefit from a rotary control knob for easier navigation.

As opposed to other stable mates, the Passport has a mostly blacked-out front fascia and dark 20-inch wheels giving the vehicle a uniquely distinct appearance in the growing lineup. Prices start at $44,420.