Even people who consider themselves the most genuine of Jordan heads might not know this bit of trivia: after officially retiring, The G.O.A.T, among his many other non-basketball pursuits, was the owner of a short-lived superbike racing team named “Michael Jordan Motorsports.” The endeavor spawned an exclusive white Jordan 4 tie-in sneaker with team colour Game Royal blue and black accents appropriately dubbed “Motorsport” released in 2006, retroed by Nike in early 2017.

As a bit of a gearhead myself with an affinity for black shoes, I knew I had to eventually pick up the alternate “Motorsport Away” variant that was dropped a few months afterward featuring a flipped colourway comprised of a black leather upper, and subtle hits of matte silver, white and Game Royal all over. 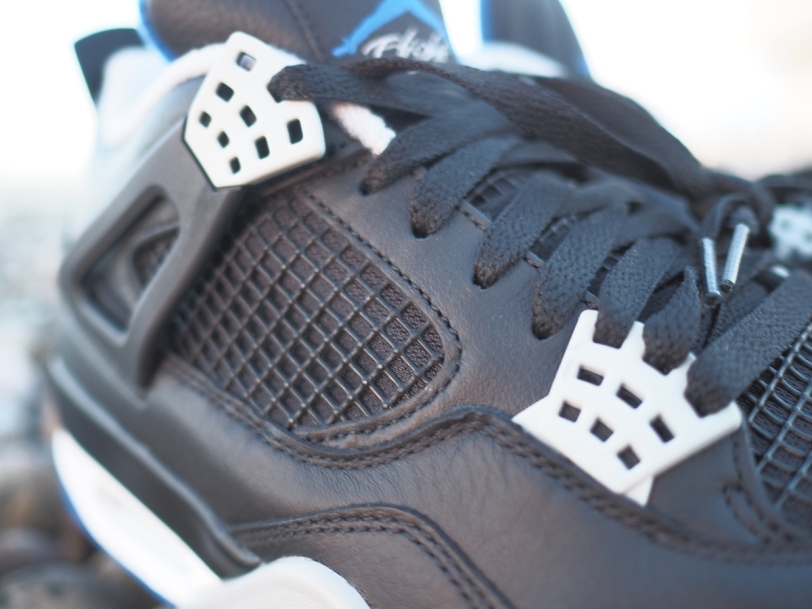 The word buttery is thrown around a little too often in the sneakerworld to describe supple tumbled leather, but these 4s really do have a soft feel to them and look the part. I love shoes that have neat little details built in and there’s no shortage of this here, like the generous use of mesh on the vamp (hello late 80s styling), winged eyestays, vintage Flight script underneath the Jumpman on the tongue and of course the visible air bubble in the heel.

While basketball kicks can sometimes be a challenge to actually wear, the relatively low profile of the Motorsport Away means slipping them on is fairly effortless when not laced too tightly. Arguably one of the few retro Jordans — including the 1s of course — which truly match almost any outfit without looking like you just stepped off the court means pinrolled/cuffed denim or chinos, joggers and shorts are all good to go.

For those lucky enough to cop at retail when these came out last year, MSRP was $255. They’re still available via the usual resellers and eBay.