Another year, another SEMA — the 53rd Speciality Equipment Market Association show took place in Las Vegas at the beginning of the month, this year hosting more than 161,000 guests. Among all the tuners and accessory manufacturers were select automakers showing off unique products not seen in dealer showrooms. We’ve rounded up the top three examples in today’s post.

If I had to pick a single car best representing SEMA 2019, it would have to be the brand new 2020 Toyota Supra. And you can’t blame the exhibitors as its one of the hottest models to come out in a long time. So hot that the Japanese company brought out its own special souped-up take on the vehicle.

Called the Heritage Edition, it’s the in-house brainchild of Ed Laukes, who is the marketing group vice president at Toyota Motor North America. Meant to be a throwback to the former platform, a lot of the styling is reminiscent of the previous gen. In fact, the rounded rear spoiler is actually the same one used on a MKIV and modified to fit.

Sitting on TEIN adjustable coilovers and bespoke 19×10.5-inch front/19×11-inch rear wheels, some serious engine mods match the show with a lot of go. The stock turbocharger has been modified to produce 18 per cent additional airflow, and is complemented by a custom intake, large diameter exhaust and engine tune. The net result? An output of 500-plus horsepower.

The upcoming Mach-E Electric SUV is getting a lot of press right now, but there was another electrified Ford basking in the spotlight at SEMA: the Mustang Lithium. Created in partnership with battery experts Webasto, the alternative energy fastback features an 800-volt power system generating more than 900 horsepower and 1,000 lb-ft of instant-on torque, and mated to a Getrag six-speed gearbox.

Many of the body components are made out of lightweight carbon fiber, and the suspension sits one inch lower than a conventional Mustang. Borrowed from the Shelby GT350R are massive six-piston Brembo front brakes, and a Super 8.8 Torsen differential ensures the Michelin Pilot Sport 4S ultra high performance tires — wrapped around 20-inch staggered Forgeline wheels — are able to hook up. 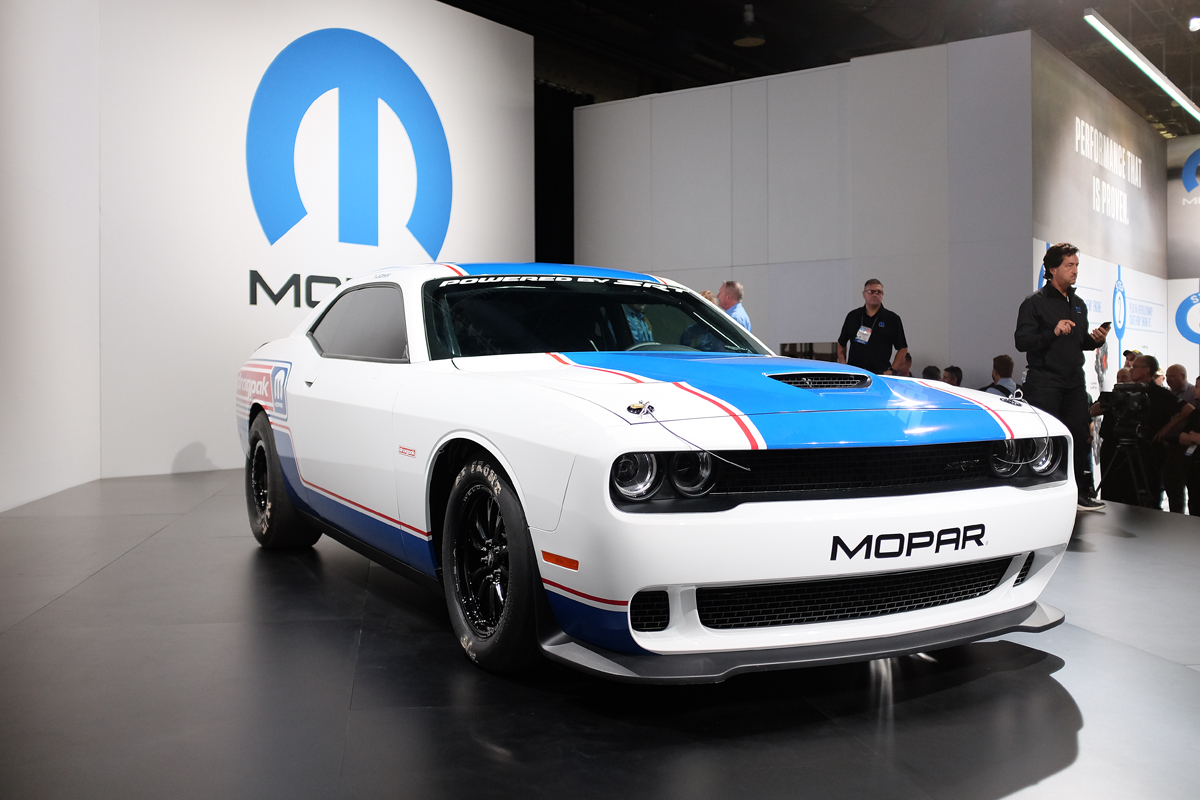 If the regular Dodge Challenger isn’t spicy enough for you, perhaps the 2020 Mopar Dodge Challenger Drag Pak will do the trick. This factory-built competition-use-only racecar, limited to just 50 units, is ready off the assembly line to light up the tarmac at National Hot Rod Association and National Muscle Car Association sanctioned events.

Looking like an SRT Hellcat wearing nostalgic red, white and blue graphics, the vehicle is clearly all business. There are the wheelie bars and parachute mount installed at the rear, and the welded-in rollcage and Racetech seats in the cabin. Under the hood lies a supercharged 354-cubic inch HEMI V8, mated to a T400 three-speed transmission.